An aeroplane is flying with velocity v at right angles to the Earth’s magnetic field B near the
North pole of the Earth, as shown in the plan view below. The plane’s wingspan (distance between
wingtips) is L. The wingtips are labelled P and S . 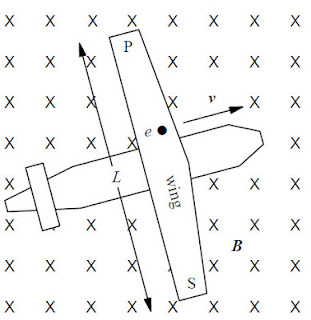 (a) Consider an electron of charge magnitude e in the metal wing of the plane at the point shown
by a dot in the figure.
(i) In what direction will this electron experience a magnetic force due to its motion in the
magnetic field? Draw a vector on the diagram to represent the force.
(ii) State an expression for the magnitude of the force on the electron in this situation


(b) While the plane is flying steadily in the magnetic field, the electrons in the wing experience
this magnetic force but do not move along the wing; such motion is opposed by an electric
field arising in the wing.
(i) Explain how this electric field originates, and draw a vector in the diagram to show its
direction.

(ii) Explain why the electric force on the electron is exactly equal to the magnetic force, in
this situation. (Hint: imagine this were not the case and consider what would happen
next.)
(c) Show that the magnitude of the electric field produced in the wing is given by E = vB .

(d) Derive an expression for the induced potential difference which arises between the tips of the
moving wing. (In terms of the length L, speed v and magnetic field strength B.)


(f) Would the potential difference between the wingtips still arise if the plane were flying near
the Equator? Explain.

[2]
(g) Suppose one wanted to check if there really was a potential difference between wingtips. If
one connected a moving-coil voltmeter between the wingtips, would it give a reading?
Explain.

(h) Will there also be a potential difference between the nose and the tail of the plane? Explain
why or why not.