Tachyons the  exchanged objecst appear only during relativistic collisions, never on their own. They are called virtual objects, to distinguish them from the usual, real objects, which we observe everyday.
In the following diagram the first object ( left line) has changed its momentum
before the second one.That would mean that there is a short interval when momentum
and energy are not conserved! The only way to make sense of the situation is to assume that there is an exchange of a third object, drawn with a dotted line (virtual particle). 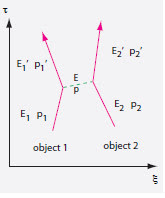 Tachyon is always a virtual object and its mass is an imaginary number!
On top of that, we also see directly from the  graph that the exchanged object
moves faster than light. It is a tachyon, from the Greek ταχύς ‘rapid’. In other words,
collisions involve motion that is faster than light! That collisions are indeed
the only processes where tachyons play a role in nature.