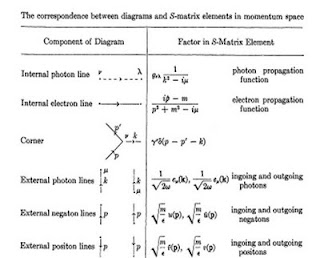 The information of modern society with the latest scientific developments, it is essential to the formation of responsible and creative behavior, towards social problems.
Contributing to the adaptation of modern scientific knowledge to be accessible not only to experts, this dissertation refers to a part of nuclear physics, in particular is an educational adaptation of the interactions between particles, using the Feynman diagrams.
The Nobel award winner physicist Feynman managed to depict the interactions between elementary particlesin a simple scientific way, suggesting the familiar diagrams, replacing the complex quantum equations of Lagrange
.
The electrons like photons can be regarded as disturbances quantized fields. The Feynman diagrams are describing the interaction of two electrons by exchanging virtual photons.
In 1955 the following correspondence(picture above) has been cited as a mnemonic device, between the data of the Feynman diagrams and the Quantumelectrodynamics mechanics theory, where there is a simplification of the theory (normalization ofQED) using the respective lines and vectors (doodling)।


The present educational procedure was addressed to students who were chosen randomly। During the comparative study before and after the teaching intervention, was found that students acquired better understanding of the interactions between elementary particles.